The Terracotta Army is made up of life-size clay soldiers that were buried with the first ever emperor of China.

These clay figures were buried with Emperor Qin Shi Huang to protect him in the afterlife. 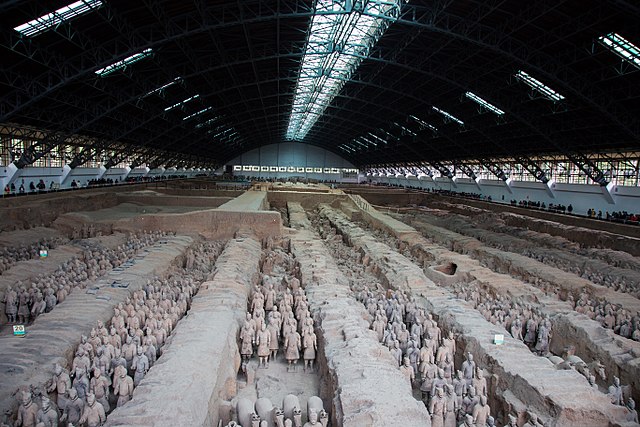 In 1974, there were some workers digging a well near Xi’an in China. They were shocked when they accidentally came across one of the most amazing discoveries of all time.

At first, they just found one life-sized soldier ready for battle. They contacted an archaeologist who then found around thousands and thousands of them. 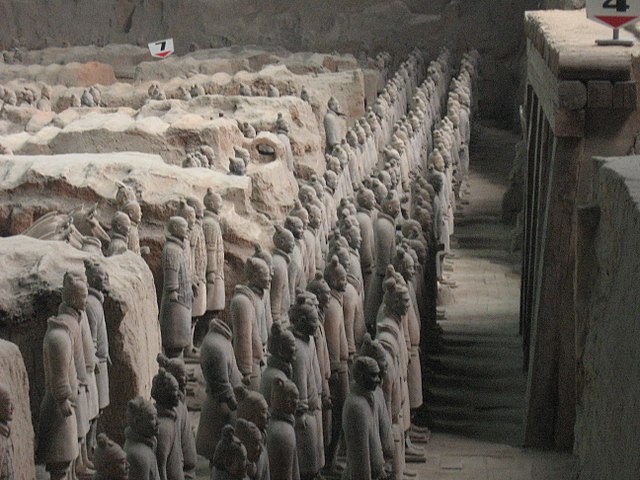 Clues about the army of the past

Emperor Qin Shi Huang must have gone to great trouble to get these soldiers made. Each of the soldiers has a different expression on their face. No two are exactly the same.

They all have different clothes, weapons and hairstyles.

There is so much detail that you could even look at the warriors to understand more about the army at the time of the Qin Dynasty.

Each piece of clothing or hairstyle gives us a clue about what rank or status the soldiers were, or what they did in the army.

There are different types of soldiers represented. There is the cavalry (with horses), soldiers (including standing and kneeling archers) and different ranks of officers.

There are also charioteers (chariot warriors and chariot drivers).

They are a brownish colour now. However, at the time they were buried, they were most likely painted bright colours. 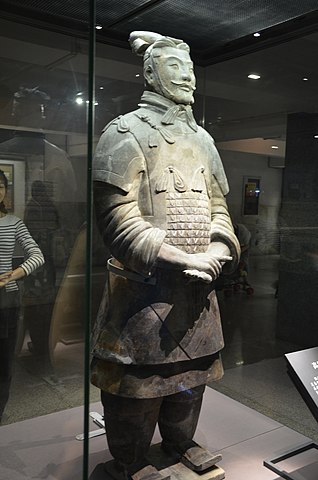 How were they built?

They must have taken a long time to build. They were extremely tall at 1.8 meters high. They weigh a lot too (160 kg each). They were not built with fancy tools or power tools. Each one was built by hand.

Each of the arms, legs and body were made separately and put together. It was important to Emperor Qin that each figure was perfect so he would be successful in the afterlife.

Every warrior was stamped with the name of the person in charge of making it. This was so that mistakes could be tracked to the person who made it.

Historians believe that it took 700,000 workers and craftspeople (artisans) to build the tomb where they were buried and make the warriors.

So why did Emperor Qin go to so much trouble?

During his life, Emperor Qin was very powerful and had united China. During the Warring States Period, Emperor Qin had defeated other powerful states.

He had great military power. After he died, he wanted to go into the afterlife with the importance and status he had during his lifetime.

He also decided to build the Terracotta Army to remember the powerful army that had been so successful for Emperor Qin during battle.

There was another reason that Emperor Qin wanted these built. Before the Qin Dynasty, rulers from Shang and Zhou Dynasties were buried with soldiers and other people who had worked for them during their lifetime.

To do this, they had to carry out human sacrifice. The Terracotta Warriors replaced real people and this meant that real human sacrifices could be avoided.

Where can you see the Terracotta Warriors?