Running out of money, Rome was under threat of attack. Rome was unable to defend itself in the same way as before and the barbarians looked to pounce on this weakness.

In Ancient Roman terms, a barbarian was anyone who did not speak Latin. The main groups of barbarians were the Huns, the Franks, the Vandals and the Visigoths (Goths).

The word barbarian comes from the Greek word barbaros. The Greeks did not speak Latin either, but the Romans did not really call them barbarians.

“Barbarians” came to mean someone who was uncivilised. It is a term that is normally applied by a civilisation who believes they are superior to another civilisation. 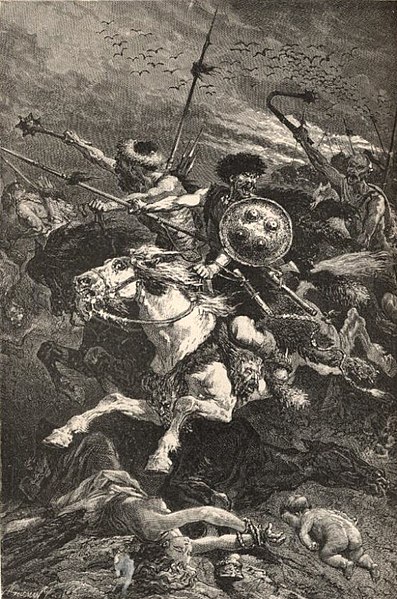 The Visigoths were quite a threat to the Roman empire. They were nomadic, which means they did not settle in one place but moved around from place to place.

They challenged the Romans across many of their borders throughout the 300s. They were the most organised group. They were the group that eventually successfully brought Rome down by attacking the city in 410.

The Vandals had moved from Northern Europe to Spain and then to North Africa. They were very powerful and functioned as a Kingdom.

Their peace treaty with Rome only lasted 12 years and they attacked Rome. They took control of Rome in 455 AD for two weeks.

The Huns were another worry for Romans. They were nomadic warriors from the east. They invaded Italy in 452 AD.

Attacking Rome was not their goal but they shook up the Romans on their home territory by attacking Italy. They also conquered most of Gaul (France).

The Franks lived in a region that is now called France. They started to attack the borders of the Roman Empire and became a powerful empire when the Western Roman Empire collapsed.

The Saxons overtook much of Great Britain. By this point, the Romans could not send over any help. They had no money or resources to defend Britain against these attacks.

There were lots of other barbarian tribes such as the Celts, the Thracians, the Parthians and the Lombards. Some barbarians were in the Roman army and fought on their side.

Why did they dislike Rome?

Many barbarians had good reason to dislike Rome, especially the Visigoths.

The Visigoths had been allowed to enter Rome to escape from the dangers of other enemies but the Romans had treated them very badly.

The Romans had created an enemy who looked to seek revenge at the nearest opportunity, right within their own borders.

The Visigoths had another big reason to dislike Rome. Emperor Valens had promised them that they could be given land and slaves if they could control all the other barbarians along the Danube River.

But Rome was suffering from a financial crisis. They had no money. Rome had to break their promise with some very angry Visigoths who never got the payment they were promised.

To Rome’s advantage, these groups spent a lot of their time fighting each other. If they had been one large group and teamed together, they may have overtaken Rome a lot sooner.