The sea lamprey looks like an eel, but really it is more closely related to other animals made of cartilage, such as sharks. Sea lampreys are usually dark shades of brown, gray, yellow, green, and blue. They are 1-2 feet long and weigh up to 13 pounds.

One of the sea lamprey’s distinctive characteristics is its round, flat mouth full of rows and rows of sharp teeth. This is important for the unique hunting and feeding strategy sea lampreys use. These rows of teeth latch onto their prey and allow them to feed. Sea lampreys are native to the Atlantic Ocean, particularly the northern and western areas. However, sea lampreys have also spread to the midwest’s five Great Lakes. In the Great Lakes, they are an invasive species, which means they are a non-native species that has taken over a new habitat.

Invasive species often pose a danger to their new habitats. Sea lampreys have seriously crippled many fish populations in the Great Lakes, such as trout, which has harmed the fishing industry as well as other predators in the lakes.

Sea lampreys can live in saltwater or freshwater. They often migrate during their lives from one habitat to another. 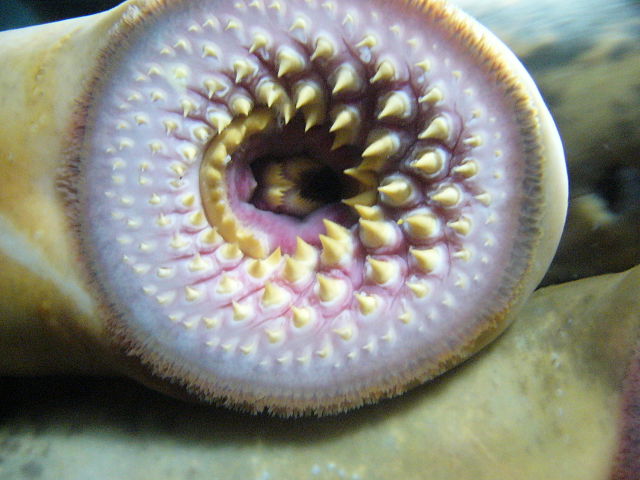 Because of the way they attack their prey, sea lampreys can feed on a variety of fish from salmon and trout to even sharks. Sea lampreys are parasites, which means sometimes they do not kill the animals they feast on, but merely wound them. However, on average only about 1 in 7 fish will survive a lamprey attack.

One of the lamprey’s most interesting characteristics is the way it hunts. As we learned, the lamprey has a round, flat mouth full of sharp teeth. After it latches onto a fish with its mouth, it uses its rough tongue to scrape away the fish’s flesh and scales. This enables the lamprey to eat away at the fish’s insides.

Although sea lampreys are major predators, they also spend time resting as well. During these times, they can use their rows of teeth to grasp onto rocks or other surfaces for a little bit while they rest. This enables them to stay still and remain safe from predators. 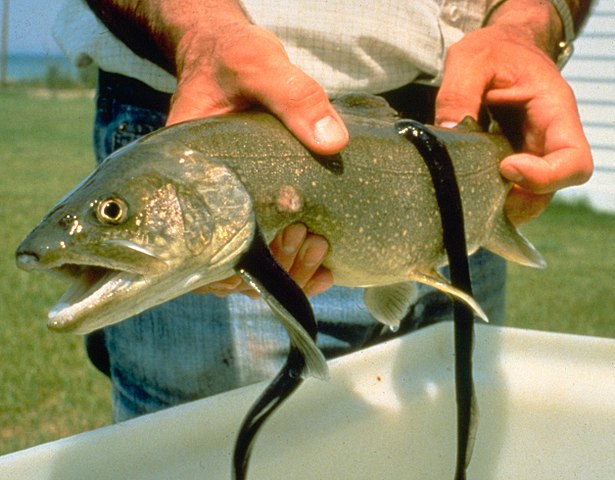