The First Punic War had been a humiliating loss for the Carthaginian Empire against Rome. Carthage lost many territories that were vital for its survival and success.

The Carthaginians could not let this go. They had to try to win back some of these lands in order to survive.

The Second Punic War was fought between 218 and 201 BC. This war is also known as the Hannibalic War.

This is because there are great tales of Hannibal the Great, a Carthaginian commander, crossing Italy on elephants.

The Romans were also led by a famous general, ‘Scipio Africanus’. He eventually defeated Hannibal in the battle of Zama (237-183 BC).

The Second Punic War was fought over many regions around the Mediterranean Sea including Spain, Italy, Sicily, Sardinia and North Africa. Within the Carthaginian Empire itself, the people were fighting against the Empire of Carthage. Soldiers who had fought in the First Punic War had not been paid, and this made them understandably upset.

It caused a war called the Truceless War.

The Truceless War was fought between 241 and 237 BC within Carthage. The Carthaginian general Hanno the Great had to resolve this battle before they could win back their lands from Rome.

After paying all that money back to Rome and losing Sardinia and Sicily, Carthage had to really think carefully about how they would win back these places.

They also needed to find the money to go to war. The Carthaginians had a commander called Hamilcar Barca. He led them to Spain to establish new cities and win back some control.

Establishing a new city strengthened Carthage’s army. Because of these new cities, they now had 50,000 men and 100 elephants.

After Hamilcar Barca died, Hasdrubal the Fair doubled the number of elephants and added more men to the army.

It was Hamilcar’s son that took over from his father and was to become one of the greatest warriors to be remembered in history.

His name was Hannibal the Great. He was seen as a fierce and brave warrior with clever tactics in battle.

Hannibal wanted to try something new. He decided to try to beat the Romans on their own land in Italy.

Hannibal won many battles across Italy. Whenever he won a battle, he made many captives. He tried to win the war by getting local people on his side.

He did this by releasing all Italian captives that were not Roman. Hannibal wanted to make it clear that he was at war with only the Romans.

To Hannibal’s despair, locals stayed loyal to Rome. This made it difficult to keep control of the places he had captured.

Rome refused to back down, and would not make a peace deal. The Roman technique in battle was to avoid direct fighting with Hannibal himself. Instead, they fought his armies or allies.

The war got bigger. In 215 BC, Rome invaded Spain. Scipio Africanus, the Roman general, was sent there and was successful in many battles.

Scipio Africanus wanted to attack Africa but the Roman Senate was unsure whether this was a wise idea at first.

In 205 BC, they decided after all to cross the Mediterranean Sea and invade Africa with 30,000 men.

Scipio Africanus had persuaded some Numidian Princes to side with him and become his allies. They gave him extra men for battle. These extra soldiers turned out to be very useful. 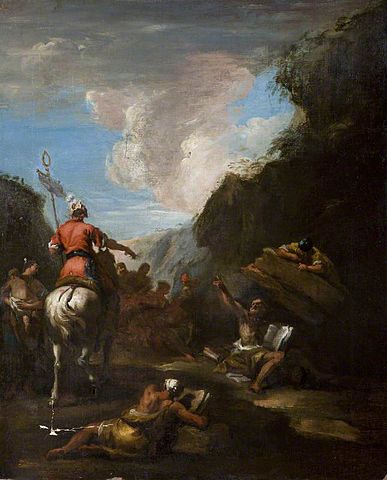 After many long invasions and battles, Hannibal and Scipio finally came head to head in Africa in 202 BC. Scipio knew just how to defeat the armies and elephants.

He created pathways for the elephants to pass through when they were charged by a stampede.

Eventually, the Romans and their Numidian allies were quite sneaky. They attacked Hannibal’s army from the behind and the Carthaginians lost 20,000 men. The Romans only lost 5000 men.

This time, the sums of Carthage’s losses were even greater than those in the First Punic War. The new debts amounted to 10,000 talents.

The Romans took the south of Spain. Also, the Numidian King, as an ally of the powerful Rome, had new territories in North Africa.

This victory was a great turning point for Rome. Winning the Second Punic War meant Ancient Rome overtook Carthage as the great power of the Mediterranean.