The Games included events such as gladiator battles, sacrifices for the Roman gods, and chariot races. These activities took place approximately 10 or 12 times per year—almost once a month.

The Roman emperors paid for the Games to be held, and allowed the unemployed and poor people to attend them. However, this was not to be nice, it was to hopefully keep the poor people in Rome happy enough to not revolt against the government.

The Roman Games, particularly gladiator battles, were held in the Roman Coliseum, a huge stone stadium and amphitheater that is still standing today. The first opening of the Coliseum was in 80 BCE.

Similar to modern day stadiums, the Coliseum has special seats for very wealthy attendees, and the upper level seating was for the poor people and peasants. Below the floor of the Coliseum were many rooms and cages for storing weapons and where the gladiators would wait.

The floor of the Coliseum is no longer there today, and visitors can see down into these pits of rooms and cages to get a sense for what it was like in the waiting areas during the Roman Games. 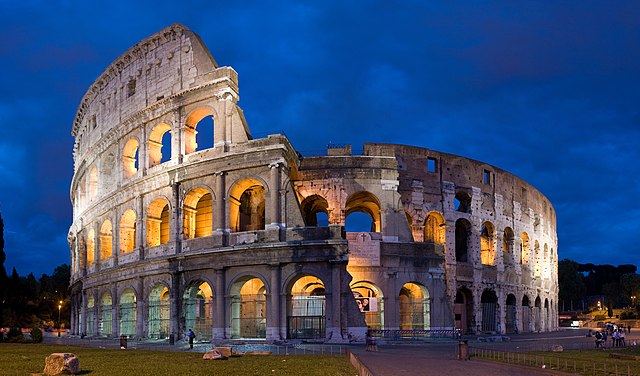 Gladiators were mostly made up of wartime prisoners, criminals sentenced to death, or slaves. Many of them with less serious offenses were allowed to fight for their own freedom. However, there were many people who volunteered to be gladiators for the glory, including women.

Many voluntary gladiators spent many years before their battles practicing and combat training. In fact, special schools were developed for this purpose. Unfortunately, the gladiator battles were very deadly, and they used weapons such as swords, maces, and even tridents.

Some of the most popular Roman Games were chariot races. They were not held in the Coliseum, but instead on specially made racetracks that they called circuses. The most famous of these chariot race circuses was the Circus Maximus, which was built in Rome. Chariot races were likely very similar to modern car racing like Formula 1, except with horse-drawn carriages instead of cars. These chariots were often pulled by 2 or 4 horses and they raced around a track for 7 laps, which often ended up being around 3 to 5 miles in total.

There were also other types of Roman Games that involved horses and horse riding. There were racing events like the chariot races, except with people riding on horseback. This is similar to the horse races that still exist today.

There was even a type of horse riding race that involved racing on horseback for a while and then dismounting the horse to finish the race by running on foot until reaching the finish line.