Tundra is the coldest of the biomes. The tundra biome gets very little precipitation, making it like the desert biome, but covered by snow most of the year.

Some characteristics for tundra are: extremely low temperatures, limited diversity among plants and animals, and a short growth season. 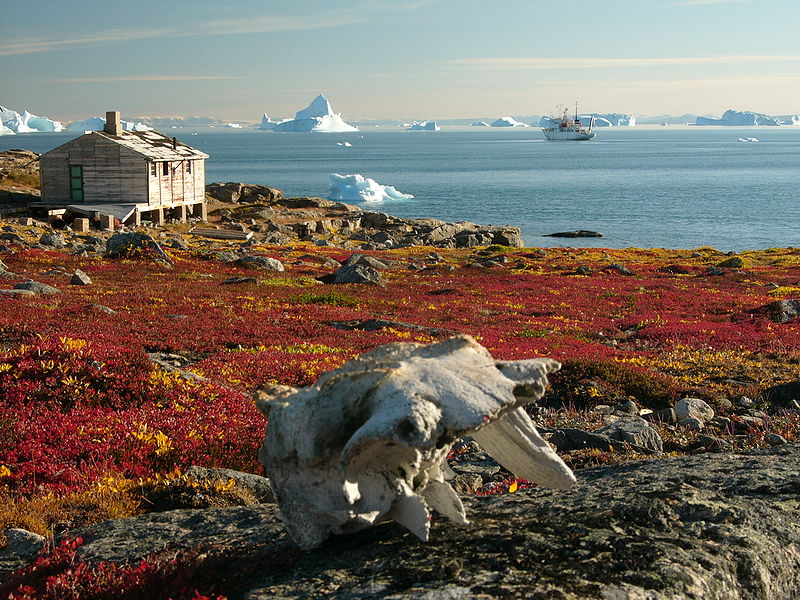 Despite its small amount of precipitation and cold weather, the tundra is usually quite wet. This is because the low temperatures slow the evaporation of water, allowing what precipitation there is to last longer than in other biomes.

There are two types of tundra: arctic and alpine.

The arctic tundra covers the region below the ice caps of the Northern Hemisphere. It covers parts of North America, Europe, and Siberia in Asia.

The growing season in the arctic tundra is between 50 and 60 days. During this time the sun shines nearly 24 hours a day.

Counting the melting snow, the precipitation for the tundra is 6 to 10 inches.

Just below the soil is a permanently frozen layer of gravel and sediment called permafrost. This permafrost stops plants from growing deep roots.

Plants have adapted to the harsh tundra environment. They grow short and in groups in an effort to avoid the wind and freezing temperatures. They are also able to carry out photosynthesis at low temperatures and with little light.

Typical vegetation found in the arctic tundra are: lichen, moss, shrubs, and flowers.

Animals have also adapted to live in the tundra. Many have short gestation periods so that they can reproduce quickly. Some animals hibernate during the winter, and others have additional layers of fat to protect them from the cold temperatures.

The growing season of alpine tundra is 180 days, longer than in arctic tundra regions.

Much of the plant and animal life found in alpine tundra have adaptations like those found in the arctic tundra region.

Changes to the global climate are having an unpredictable effect on the tundra biome. Non-native animals are entering tundra biomes and competing with native species for rare nutrients. Perhaps surprisingly, warmer weather is threatening some plants that have adapted to the colder environment.