Solar-thermal power plants are constructed to concentrate the sun’s energy and transfer that energy to create heat. The heat is used to boil water and make steam to operate steam turbines which create electricity for homes, factories, and various industries. Roof-top solar panels collect the heat from the sun and transfer that heat to water boilers and tanks to replace furnaces that use gas and oil. Techniques to Use Solar Power

One technique uses mirrors to concentrate sunlight onto pipes filled with oil. The pipes are directed to reservoirs of water to boil the water and create steam to power turbines to produce electricity.

Another technique uses moveable mirrors that direct the rays of the sun on a collecting tower. Inside the collecting tower is a receiver to accept the flow of molten salt which runs a generator.

A passive technique makes use of windows on buildings that allow sunlight to strike heat-absorbent tiles on the floors and walls. At night the tiles release the heat and keep the building warm. 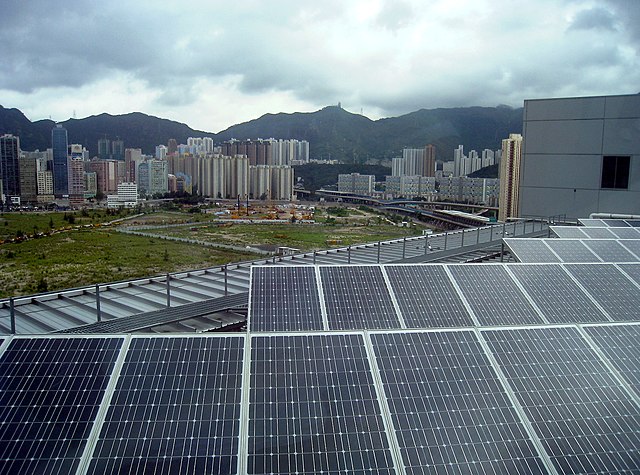 Solar energy is a constant and available source of energy that is does not cause pollution or noise. It can be used in remote areas that are off the grid or to power satellites within the earth’s orbit.

Solar power, once installed, lowers power bills to municipalities, factories, and individual homeowners. It is estimated that the installation of solar electricity can be recouped in five to ten years.

Using solar power instead of burning fossil fuels reduces carbon emissions into the atmosphere which is changing the planet and the major cause of global warming.

Installers and suppliers of solar panels offer 25- to 30-year warranties. Maintenance is almost not needed because the parts do not wear out and the life expectancy could go well beyond the warranty. In fact, many of the original solar panels have been producing electricity for more than 40 years and are expected to do so for decades into the future. The installation costs of solar power are the highest of all renewable energy sources. Even with the best technology available today, the efficiency of solar panels is low, only about 22%.

Solar energy can be interrupted during nights and cloudy weather. A storage device, like a battery or a series of batteries is needed.

Solar panels can be damaged by tornadoes, hurricanes, rain, and hail storms. Damaged panels have toxic compounds inside and have to be handled and disposed of by professionals, which adds to the cost of replacement panels.

Latitude (the location of a country) is the determining factor to whether solar panels are going to be effective or not. This means Canada and Russia are at a disadvantage. Even places that are close to the equator are at a solar disadvantage because of the great number of days every year during which the area is covered by cloud and rain.