While most depictions of hyenas show them as scavengers, they are in fact actually skilled hunters. Spotted hyenas kill 90% of the food that they eat. Spotted hyenas live in sub-Saharan Africa, though they historically could be found throughout Africa and Eurasia. They can live as far east as India.

Today they can be found in grasslands, savannas, semi-deserts, woodlands, and mountainous habitats. They do not reside in equatorial forests.

A clan of hyenas will have at least one communal den. These dens are usually old warthog, aardvark, or bat-eared fox burrows.

Spotted hyenas are typically 44-73 inches in length from nose to tail, and can be up to 34 inches in height at the shoulder. Females are heavier than males and can weigh as much as 190 pounds.

They have sandy-colored fur, with dark spots on their body and legs. They also have a shorter mane on their neck and shoulders.

Spotted hyenas have massive teeth and jaw muscles that allow them to rip all of the protein and fat off of bones. They also have large hearts which allow them to chase their prey over long distances. Spotted hyenas are omnivores, though only barely. They eat all herbivores, including wildebeests, antelopes, birds, snakes, lizards, and insects. 10% of the food they eat is scavenged.

They prefer to eat mid-size prey, but will also kill and eat giraffes, rhinos, and elephants.

Spotted hyenas eat bones as well, with special adaptations that allow their digestive system to extract nutrients from bones.

An adult spotted hyena eats between 4 to 9 pounds of food a day.

Spotted hyenas have a complex social system, called clans, that can contain 80 hyenas. Females rank higher than males with the clan following an alpha female.

They are nocturnal animals. During the day spotted hyenas rest in their burrows or vegetation to stay cool.

Spotted hyenas are territorial, though multiple clans can reside in the same territory. Clans will even work together when hunting, though they will fight over the kill once it is dead.

Clans defend their territory through scent markings, vocalizations, and boundary patrols. Males tend to patrol the boundary while females vocalize and produce the scent markings.

Global population of spotted hyenas is believed to be between 27,000 – 47,000. The largest spotted hyena population is in Tanzania with between 7,700 – 8,700 found in the Serengeti-Masai ecosystem.

Female spotted hyenas give birth to usually one or two pups a year. The pups are born with black fur and with their front teeth fully erupted. Pups will fight for social dominance only a few days after birth.

It is difficult to determine how long spotted hyenas live in the wild, though they can live up to 40 years in captivity. 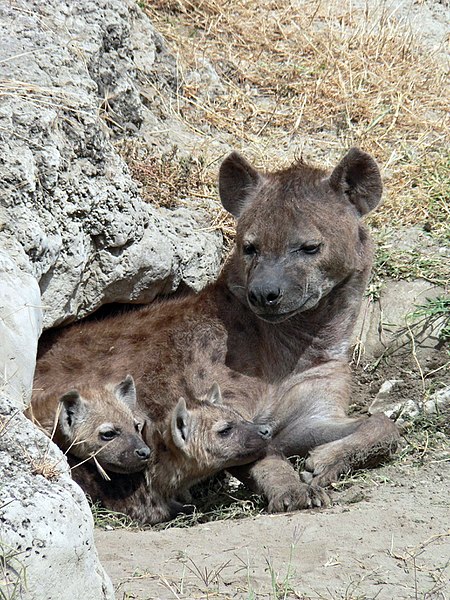