Generally, most people think of any small, creepy-crawly as a bug. However there are scientific classifications for these creepy-crawlies.

They are all part of a classification called anthropods. Some bugs are insects, and some are arachnids. There are huge differences between insects and arachnids, and there are a few similarities.

An insect’s body is made up of three sections – the head, the thorax (the middle section), and the abdomen. An insect has six legs that are attached to the thorax.

These legs are paired and jointed. However, there are some insects as an adult that have four.

Some insects have wings connected to the thorax and others do not. 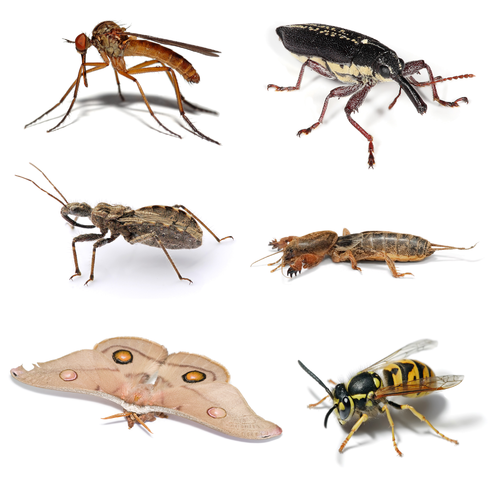 All insects have a pair of antennae mounted on their heads. Some insects have compound eyes and many insects have a set of three simple eyes. Most insects can notice color and dark and light. An adult insect lays eggs. When the eggs hatch, the young are called nymphs. As they grow, they discarding their outer covering and growing a new one; this is called molting.

The category of insects includes: butterflies, moths, beetles, centipedes, flies, grasshoppers, and social insects like bees, ants, wasps, and termites. Most insects are small but some can be up to 7 inches long. The scientific study of insects is called entomology.

An arachnid (pronounced ə-ˈrak-nəd) or spider has only two body sections: the cephalothorax (the head and thorax combined) and the abdomen. An arachnid has eight legs attached to the abdomen, which are paired and jointed. Arachnids do not have wings. They can have hairy bodies or be hairless.

Arachnids have simple eyes and not compound like an insect. However, some arachnids have a number of simple eyes (some scorpions have seven pairs of eyes), no eyes, or one pair of eyes on stalks. Regardless of how many eyes they have, arachnids do not have good sight. They rely on the movement of air and scent to get information about their environment. 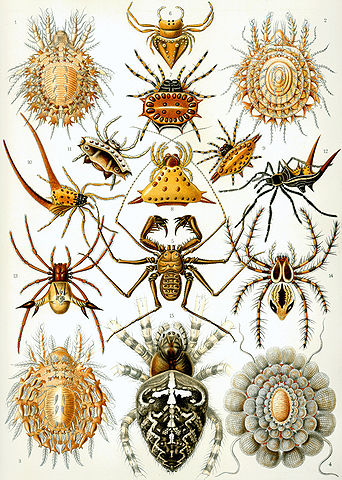 Do you wonder where the name ‘arachnid’ comes from? There is an ancient Greek story that Athena (the Goddess of War) came across a woman who was boasting about her weaving. Her name was Arachne (pronounced ə-ˈrak-nee). Gods and Goddesses despised people who boasted, so Athena punished Arachne by turning her into a spider.

There are over 100,000 species of arachnids. Some people don’t know that scorpions and ticks are members of the arachnid family.

Similarities between Insects and Arachnids

Both insects and arachnids have an exoskeleton, which means they have a skeleton on the outside of their bodies to protect their insides. Some exoskeletons are hard and some are soft. The legs of both are protected by muscles and skin.