Gorillas are some of the world’s most intelligent animals, and some of the most endangered. They’re also some of the closest genetic relatives to humans.

Let’s explore more facts about these gentle giants! Be sure to watch our video on silverback gorillas and at the end of the article, try out our fun activity! 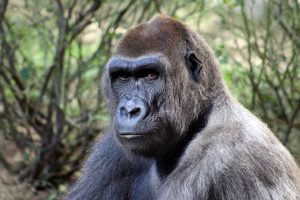 Gorillas are large, stocky primates. They are usually 4 to 6 feet tall and weigh up to 440 pounds. They are the largest primates in the world.

They have black, hairless faces with small eyes and large nostrils. Gorillas also have very big hands and broad shoulders and chests.

Their arms are longer than their legs. They often walk on all four limbs at once, called “knuckle walking.” Western gorillas have shorter hair. Their hair is usually gray or brown, and it’s often red on their heads.

Male gorillas of both species have an area of white hair on their backs.

This is why they’re sometimes called “silverbacks.” Watch this close encounter with a silverback gorilla from BBC Earth!

Where do gorillas live?

Eastern lowland gorillas dwell in part of the Democratic Republic of Congo, Uganda, and Rwanda.

Mountain gorillas (a subspecies of eastern gorillas) live only in the Virunga mountain region. 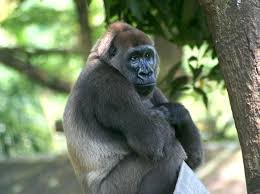 Cross River gorillas (a subspecies of western gorillas) live in a small region in Nigeria and Cameroon.

What do gorillas eat? 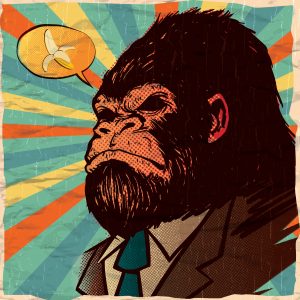 Gorillas live in groups of 6-12. The leader of the group is the oldest, largest silverback (adult male). The rest of the group is made up of females, their children, and younger males called blackbacks.

As the leader, the silverback chooses when the group eats, sleeps, and travels. He’s very protective of his family. When he feels threatened, the silverback will beat his chest and charge. 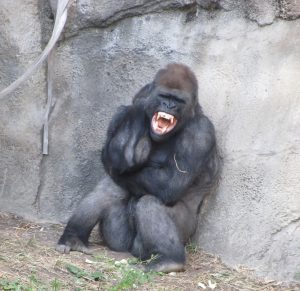 As young males get older, they leave their family group to live alone or to create a family group of their own.

Gorillas are most active during the day. At night, they form “nests” of leaves and other plant material to sleep in. When gorillas are very young, they share a nest with their mothers.

Female gorillas give birth to one baby at a time. At birth, gorilla infants weigh 3-4 pounds. They begin to crawl when they are two months old and start walking at eight or nine months. 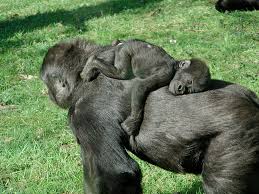 Gorillas are very dependent on their mothers until they are about three years old. Females give birth to one gorilla every four to six years.

Gorillas display many human behaviors, like laughter and sadness. 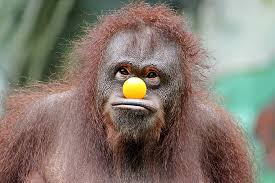 The western lowland gorilla has the largest population, at about 100,000.

The total population of the mountain gorilla is about 880, but they have shown an increase in numbers.

The population of the eastern lowland gorilla has declined sharply and is currently under 4,000.

Cross River gorillas are the rarest, with a population of only 250-300. 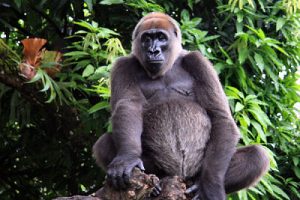 All of these species are endangered or critically endangered. Gorillas are threatened by habitat destruction, hunting, and diseases like Ebola.

The low birth rate of gorillas is another issue.

Efforts are being made to increase protected areas for gorillas, stop illegal hunting and trade, and increase support for gorilla conservation.

Other Interesting Facts About Gorillas 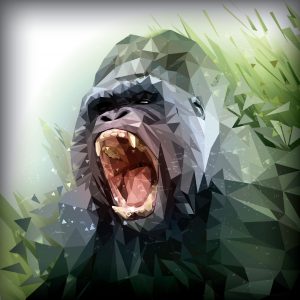 Now, try our fun coloring activity on gorillas! You know a whole set of new facts about gorillas, now it’s time to have fun coloring one!