The American bullfrog is the largest frog in North America. It is known for its distinctive bellowing which can be heard day or night.

The bellow is made only by male bullfrogs. It resembles the sound of a mooing cow, which is where the bullfrog name comes from. 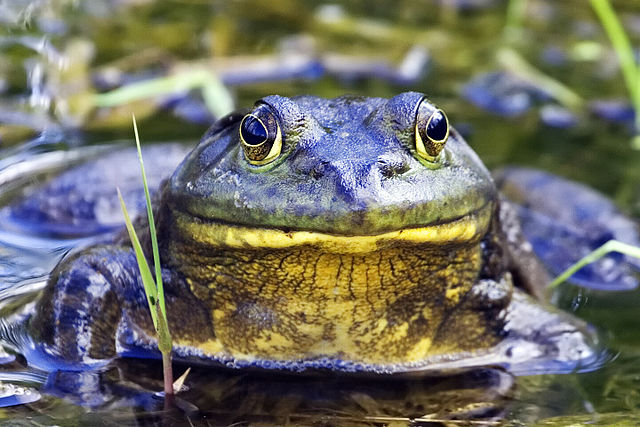 The species has also been introduced to southern Europe, South America, and Asia. It is unknown if these introductions were accidental or on purpose.

The American bullfrog is the most wide-ranging of amphibians in North America. It prefers warm, calm waters and can be found in freshwater lakes, ponds, and marshes.

Bullfrogs spend almost their entire lives in the water. To help them survive they have fully webbed feet and smooth, slimy skin.

American bullfrogs are the largest frogs in North America, weighing up to one and a half pounds. Their average length is between 4 – 6.9 inches. American bullfrogs can be dark green or brown, with dark spots on their backs.

You can tell the difference between a male and female American bullfrog by the size of their external ear hole. Located just behind the bullfrog’s eyes the ear hole is much larger than the eye in male bullfrogs, and smaller or equal to the size of the eye in females. 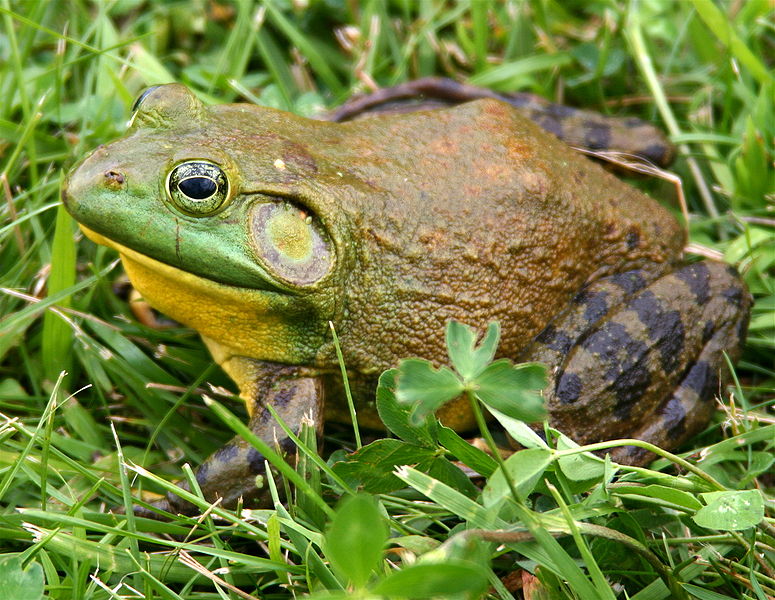 Believe it or not, but American bullfrogs are nocturnal predators. They eat snakes, worms, insects, and even birds.

Bullfrogs sit and wait for their prey to pass them by. They then jump towards their prey with their mouth open. They can also attack with their long tongues.

American bullfrogs enjoy warm weather and will hibernate during the winter. During hibernation the bullfrog will bury itself in mud.

Bullfrogs hunt during both day and night. They can consider their territory to be up to 80 feet from a source of water.

Male American bullfrogs can be very aggressive. They will wrestle other frogs away from their territory.

American bullfrogs are known for their deep “jug-o-rum” bellow. Only males make this bellow and it can be heard over a half mile away.

The American bullfrog also has exceptional sense of vision and vibrations. These senses help them determine where their prey is located.

American bullfrogs are considered an invasive species in many parts of the world. A single female can deposit 20,000 eggs. Bullfrogs breed once a year.

The typical lifespan for an American bullfrog is 7 – 9 years.

Three to four days after fertilization tadpoles emerge. It takes between one to three years for a tadpole to become an adult bullfrog.

Once fertilized tadpoles are completely independent and have no connection with either parent. 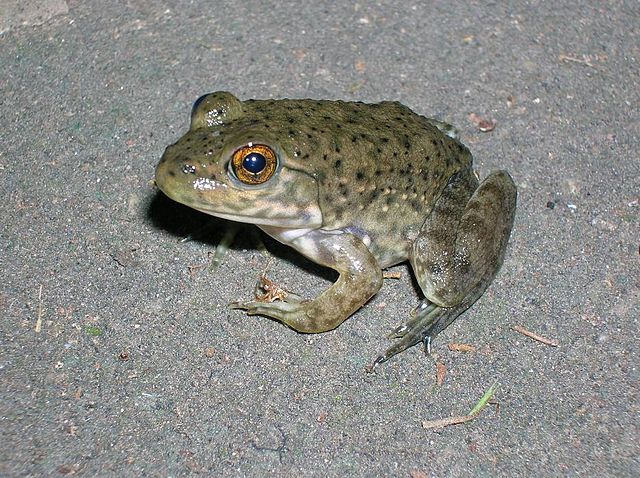